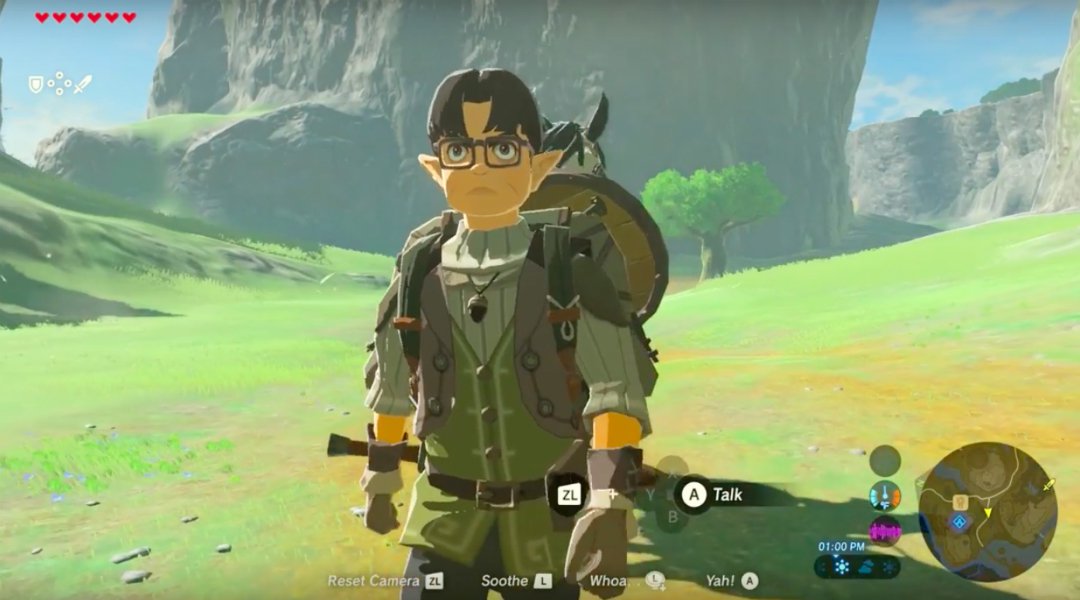 Zelda: Breath of the Wild Has a Satoru Iwata Tribute?

The Legend of Zelda: Breath of the Wild players think that they may have stumbled upon a tribute to late Nintendo president Satoru Iwata in the game. Iwata passed away in 2015, during development of the Nintendo Switch and Wii U game, and some players think that an NPC has been designed to honor his memory.

As highlighted in the video below by YouTuber called Seaniccus, an NPC named Botrick bears a striking resemblances to the late Nintendo executive. Found at Outskirt Stable, near the Breath of the Wild‘s starting area, Botrick is a friendly guard who wears a pair of glasses and has a middle parting in his hair, just like Iwata did, and he also looks a little older too which just adds to the similarities.

Seannicus notes that Botrick’s appearance is particularly notable as none of the other guards in the area look like him – and very few characters in the Zelda games wear glasses.

Perhaps the biggest hint that this is an intentional tribute, though, is how Botrick interacts with the player. In addition to dispensing helpful advice and offering significantly better deals than other traders in the game, the NPC also suggests that players visit Satori Mountain to talk to the Lord of the Mountain. Should players take a break from trying to get 100% in the game to visit the location – which is just one letter off of the name Satoru – they’ll find a beautiful area that’s incredible peaceful and serene.

The Breath of the Wild team was heavily affected by Iwata’s passing, with the game’s director Hidemaro Fujibayashi recently revealing that when the team came up with good ideas and wanted to talk to Iwata about them, they were saddened when they remembered they were unable to. Fujibayashi also said that sometimes the team felt that Iwata was “watching over” them as they worked on the title, which is now one of the most well reviewed games in history.

It would make sense then that alongside the games other oddities and Easter eggs, such as its mysterious language, that the Breath of the Wild team would also create a small but moving tribute to the mentor that they held close. But even if Botrick wasn’t designed as a shout out to Iwata, it’s still a wonderful thing to have discovered in the game.

The Legend of Zelda: Breath of the Wild is now available on Nintendo Switch and Wii U.