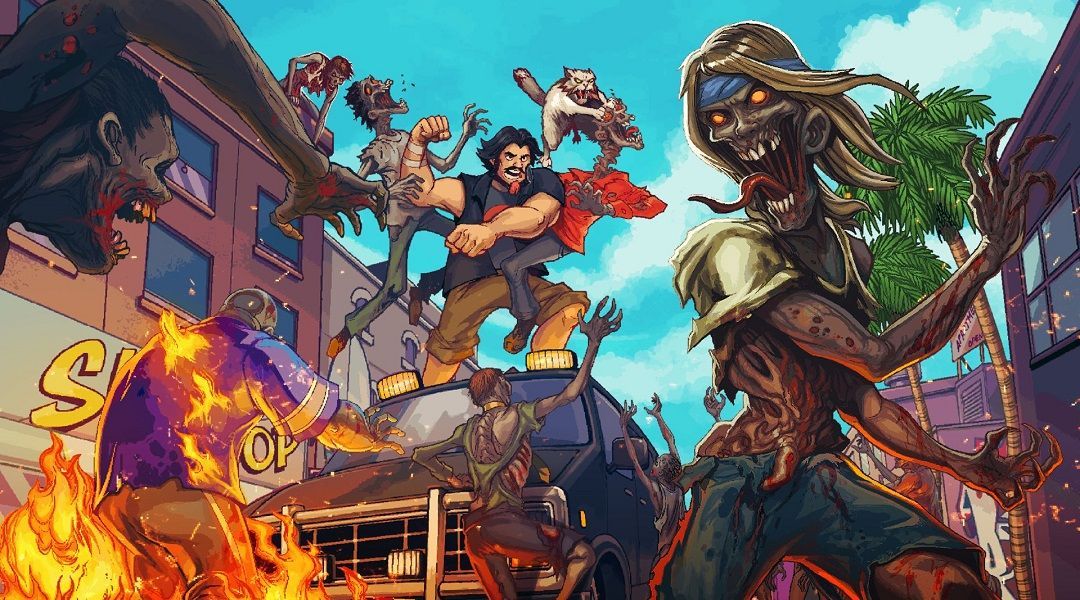 Deep Silver’s Dead Island Retro Revenge comes free with any purchase of Dead Island: Definitive Edition, but it’s a short, fun, and worthwhile game in its own right.

The Dead Island series has been experiencing something of a renaissance lately. While it might seem odd given that the zombie game genre itself is beginning to become oversaturated after some critical successes like The Last of Us, Deep Silver has remained dedicated to the classic tropes of the undead gaming experience. Dead Island games aren’t necessarily about being ground-breaking or innovative – they’re supposed to emphasize freedom and fun with dashes of horror and survivalism.

The story, such as it is, follows hero Max as he tears through a post-apocalyptic, zombie-infested California in order to save his cat, who is inexplicably kidnapped by two ne’er-do-wells at the beginning of the game alongside Max’s RV. The game contains a few short, animated cutscenes that mostly just function to show upgrades players have unlocked at the end of a chapter or explain how the setting has changed from level to level. Although the narrative is sparse, it’s a deliberate choice from a developer that is clearly aiming to evoke feelings of late 80s arcade nostalgia in older gamers.

That nostalgia trickles down into Dead Island Retro Revenge‘s gameplay as well. Combat takes place in 3 vertical lanes that will be familiar to fans of side-scrolling games from yesteryear, and although the first few levels can be more punishing than one would expect, the learning curve is very easy. Within a few levels, players are both more accustomed to the timing-based attacks that characterize Max’s offense and the levels themselves get a bit faster as Deep Silver throws more challenging configurations of enemies in waves at gamers.

That mechanic works pretty well for a game with only 3 short chapters and no boss fights, but it can get repetitive towards the end. That’s not for lack of trying from Deep Silver, which did about as much as it possibly could with the prohibitively small level maps and small variation of enemies. Giving each level a points system that rewards players for perfectly-timed attacks and not taking damage adds replayability where there otherwise wouldn’t be, but it understandably feels stretched a bit too thin once the ending cutscene loads up for the first time.

Still, despite complaints that Dead Island Retro Revenge wears out its welcome even over the course of just 3 chapters (each containing less than 12 levels that only take a few minutes each, deaths notwithstanding), there’s a lot to like about this game. The way each level is laid out is a clear decision to punish gamers for playing scared – those who take the initially risky path that demands a better grasp of mechanics will often be rewarded with an easier route through a group of enemies immediately after. Those who take the easy way out right away will often have to use their special abilities, which frequently factor in only once a level, to clear an insurmountable wall of enemies.

Unfortunately, the implementation of special magic abilities and unique, over-powered weapons is something that could have included a lot more variation and stylistic choices for players. In the end, the choice between magic abilities and weapons is often one that resembles choosing a different skin or aesthetic rather than something that could be more useful in a specific level. Levels, too, are usually just re-skins of the same kind of approach, as the same barrels, barriers, and other background aesthetics crop up everywhere.

That’s really the problem with Dead Island Retro Revenge – it’s a good game, far better than an afterthought on the Dead Island: Definitive Collection has any right to be, but it has a few glaring flaws that ensure it also isn’t a particularly memorable title, either. Five years ago, a game like this might be a stand out in the Xbox Arcade, but now, with 2D games like Salt & Sanctuary pushing the boundary on how we look at “simple” games such as these, Dead Island Retro Revenge struggles to set itself apart. Beating the game unlocks Marathon and Survivor modes, but they do little to dispel the monotony that eventually settles in.

Of course, it’s important to remember that Dead Island Retro Revenge is an addition to a remastered collection of Dead Island games that’s being included for free in those bundles and is only $4.99 USD on its own. That’s still a lot of value for a game that can kill 3-5 hours comfortably and enjoyably, and gamers would likely have spent a lot more quarters on it should it have been a star attraction in an old arcade. For that reason alone, and the number of things Dead Island Retro Revenge gets right in its approach to building off the back of side-scrolling nostalgia, we’re comfortable recommending this title to gamers looking for a quick fix of solid, 2D beat-’em-up action without many frills.

Dead Island Retro Revenge is available now on PS4, Xbox One, and PC, either as a standalone title or as part of the Dead Island: Definitive Collection. Game Rant was provided a PS4 code for this review.