Tom Clancy’s Rainbow Six Siege has the polish of a big budget release, but the amount of content that one expects to see from a low budget free-to-play game.

The cancellation of Rainbow Six: Patriots left the future of the tactical shooter franchise in question. Ubisoft then introduced Tom Clancy’s Rainbow Six Siege to the world with an impressive E3 2014 demo, which promised to take the series back to its roots, while also adding highly destructible environments to the mix. The game delivers on these promises, but a general lack of content holds it back from reaching its true potential.

Rainbow Six Siege consists of three primary game modes. The one that players will likely spend their time with is the standard multiplayer, which features two teams of 5 battling it out across the game’s well-designed, highly detailed maps. In multiplayer, the teams take turns attacking and defending in a few different multiplayer match types.

These match types include hostage situations, bomb defusal missions, and more. While the actual objective may differ between the match types, they all boil down to the same concept of one team barricading a room and the other team trying to find and eliminate those defenders. The objectives rarely factor into the experience at all anyway, as it’s much easier to eliminate all members of the enemy team instead, and so that’s basically what everyone does online.

When bored of PvP multiplayer, players can work cooperatively in the returning Terrorist Hunt mode. The objectives from multiplayer are integrated in here as well to give Terrorist Hunt added flavor, but for the most part, veterans of the franchise should know exactly what to expect. For those unfamiliar with the history of the series, Terrorist Hunt tasks players with finding and eliminating all of the AI-controlled enemies roaming the map, although Siege does add some defending match types as well. 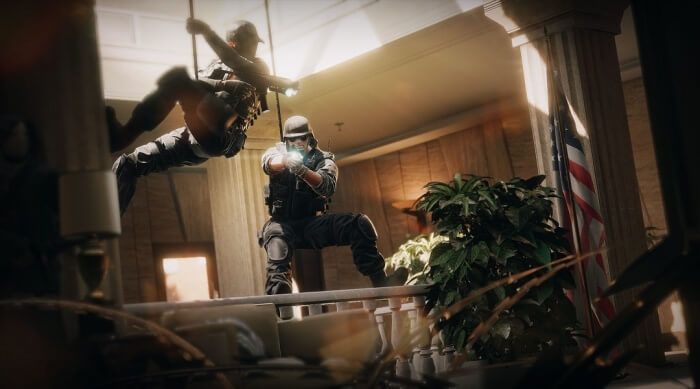 The third primary game mode is Situations, which, despite Rainbow Six Siege not having an actual single player campaign, is still a single player experience. Situations are challenges designed to teach players how to play the game, though they are more entertaining than a standard video game tutorial. Furthermore, each situation has three bonus objectives meant to teach players new strategies, as well as add replay value to the game.

The Situations mode is fun, but shallow, and can be completed within a few hours. However, there’s another single player experience in Rainbow Six Siege, via the Lone Wolf match type in Terrorist Hunt. As its name implies, this is solo Terrorist Hunt, though oddly enough, it still requires an Internet connection to function.

Terrorist Hunt, multiplayer, and Situations are all fun for a few hours, but with only 11 maps and a handful of match variations, Siege runs out of steam quick. There’s a bevy of unlockable content to pursue for those that stick with the game, including numerous operatives each with their own unique gadgets, but none of it is engaging enough to be a real driving force in the game.

While Rainbow Six Siege certainly has a content deficiency, the minute to minute gameplay can still be a blast. This is especially true when playing with a full party of friends, but random people online work just as well when they are actually playing to win.

Unfortunately, the online community in Rainbow Six Siege isn’t always willing to cooperate. The vast majority of players simply do not use mics, which can be damning in a game that requires constant communication between teammates. Worse are the players that like to team kill, and while Ubisoft claims that there are plans to deal with team killers in Rainbow Six Siege, it has been a recurring problem with the game since launch. Perhaps implementing a playlist that removes friendly fire altogether could alleviate this issue, even if it does come at the cost of the game’s sense of tactical realism.

Team killing is a definite problem that needs to be addressed, but otherwise, the online experience in Rainbow Six Siege is free of frustration. Since the servers have gone live, the game has run perfectly, with matchmaking practically instantaneous. That being said, some gamers have reported server issues with Rainbow Six Siege on PC, but we never ran into anything of the sort during our time with the PS4 version.

Rainbow Six Siege has reliable servers, intense gameplay, interesting maps, and superb graphics. It seems likely that a year from now – once the game’s extensive post-launch DLC plan has been implemented – that Rainbow Six Siege could be one of the industry’s premiere FPS titles because of these strengths. However, in its current state, the game’s serious lack of content makes it difficult to justify its cost. It’s an unfortunate trend with some of this year’s big shooters, but hopefully developers recognize the issue, and start releasing their games with a satisfactory amount of content to keep the community engaged for the long term.

Tom Clancy’s Rainbow Six Siege is currently available for PC, PlayStation 4, and Xbox One. Game Rant was provided with a PS4 code for this review.