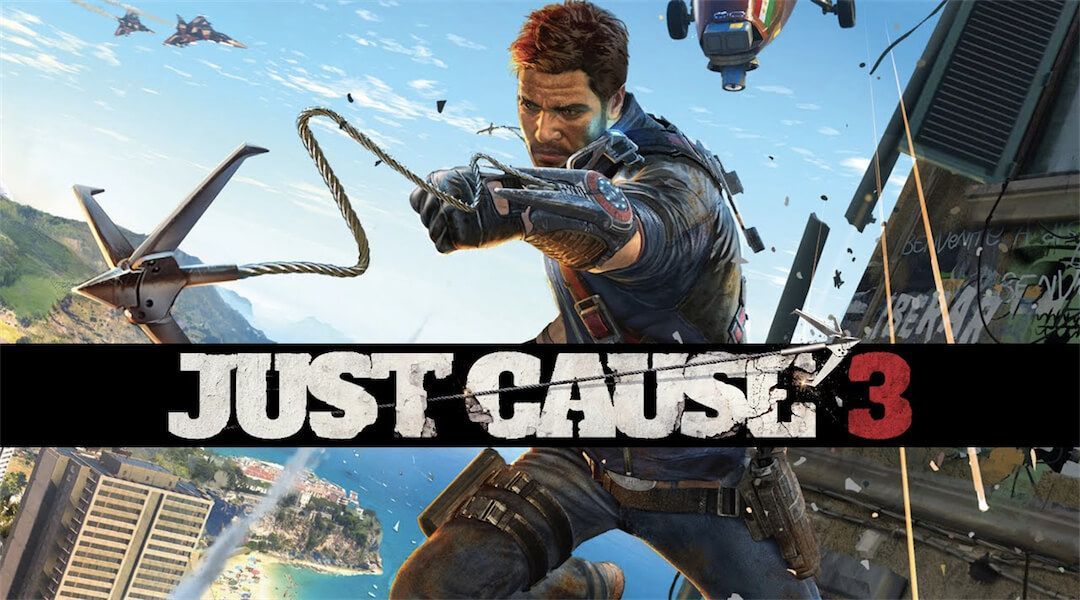 Just Cause 3 may suffer from bugs and lengthy load screens, but it still offers an over-the-top action experience that is more fun and exciting than any summer blockbuster from recent years.

Every summer there is an action movie that isn’t exactly great, but audiences still can’t get enough of it. The sheer spectacle and scale of the blockbuster makes it possible to ignore or overlook gaping plot holes, mistakes, and cliche tropes that would otherwise ruin a normal movie. Much like these Michael Bay-inspired films, Just Cause 3 delivers a sometimes messy gameplay experience that is saved by its outrageous dedication to chaos, explosions, and super heroics.

For those unfamiliar with the action-adventure franchise, Just Cause 3 puts players back in control of protagonist Rico Rodriguez. The game starts with the adrenaline junkie hero arriving at his homeland, the fictional Republic of Medici. After shooting down a few enemy bases and jumping off of a plane, Rico begins his quest to aid the rebel forces and free the people from Sebastiano Di Ravello’s military dictatorship. Plenty of civilians will get caught in the crossfire during the battles, but Just Cause 3 isn’t really a game that concerns itself with something as serious as collateral damage. 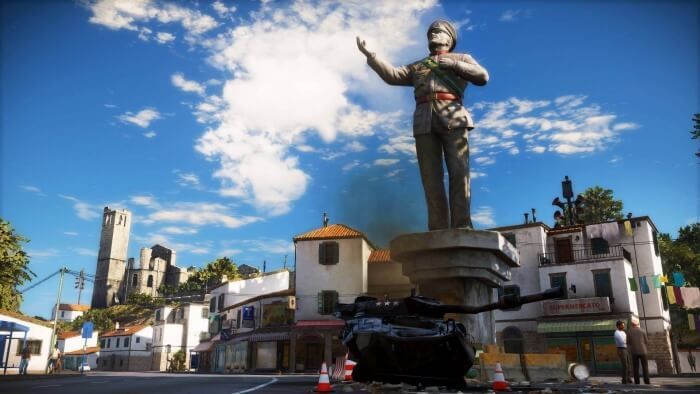 Third person action drives the story, which quickly becomes pretty unimportant. As soon as players understand that they are traveling from town to town clearing out the bad guys by making things go boom, the plot begins to take a backseat to the action. The game’s narrative definitely provides a few good laughs here and there with its usual over the top take on action movie tropes, but in general the story isn’t the game’s strongest feature.

The game’s creative action on the other hand provides plenty of motivation to spend hours and hours in the Republic of Medici. The game offers the usual action adventure tools like a full arsenal of automatic weapons, vehicles to drive, land mines, and a destructible environments. All of that is a great foundation, but it’s the hero’s more creative tools that make Just Cause 3 stand out from the crowd. The parachute, hang gliding suit, and upgraded grappling hook give players incredible freedom to travel and destroy in incredibly unique and creative ways.

Once players complete the short tutorial and get into the real sandbox, the only limitation for how to complete objectives is their own imagination. When a swarm of enemy trucks or helicopters move in on a player’s location, they are welcome to stand their ground and duke it out in an old-fashioned gun fight, grapple to the top of a building and use a rocket launcher to wipe everyone out at once, or get really insane and grapple onto the enemy’s vehicle and hijack it. If you haven’t tried jumping off of a cliff and hang-gliding until you get the right angle to grappling hook onto a moving helicopter then you’ve been missing out.

It may be frustrating for some players, but Just Cause 3’s gliding, flying, and grappling mechanics are actually pretty difficult to master. This is both a strength and a weakness, depending on the play style and patience of each player. The short tutorial gives players the bare minimum crash course in the tools that are in Rico’s arsenal, but it takes hours of gameplay to start to feel confident enough to use all of the new abilities with ease. Taking the time to learn the quirks and tricks pays off, though, and allows players to soar around the island and swing between buildings like more of a super hero than an action star.

In addition to using the grappling hook for fast traversal around the map, players can also use its hi-tech tethering ability as a means of destruction. Players have the ability to tether two items together and then zip them into each other. Zipping a barrel of gasoline into a oil tank causes a glorious explosion but that’s just the tip of the iceberg; this ability opens up the window for plenty of creative ways to blow up targeted buildings or dispose of soldiers that are loyal to the dictator.

The game’s open sandbox does offer plenty of freedom to run around and enjoy the chaotic world. The story quests do put things back on rails every so often and this can be pretty distracting for players who enjoy the freedom that the game offers at every other turn. Many of the story quests feel a bit tedious and involve taking out enemy units or protecting other rebel soldiers. Although these can be a bit of a drag, they definitely don’t make up the bulk of the game.

The game’s missions may get a little repetitive, but the challenges that pop up around the map keep things fresh and offer plenty of motivation to spend more time with the game. Long before we had the chance to get bored of the gameplay we found ourselves fighting with bugs, glitches, and very lengthly load screens. We never suffered a game ending bug or lost our save, but there was definitely a few more problems than we like to see from a AAA release during its first week. Hopefully a patch is on the way to resolve some of these issues, because they can cause some real frustration for gamers who would otherwise be enjoying the game.

Although it doesn’t attempt to redefine the third-person action genre, Just Cause 3 does an excellent job putting a fresh spin on the usual tropes and delivers some of the most exciting explosions we’ve ever seen in a video game. The sound of every gun and explosion are incredible and make it very difficult to not play this one with the surround sound on and the volume turned up way too loud.

Just Cause 3 is now available for PC, PS4, and Xbox One. Game Rant was provided an Xbox One copy for this review.