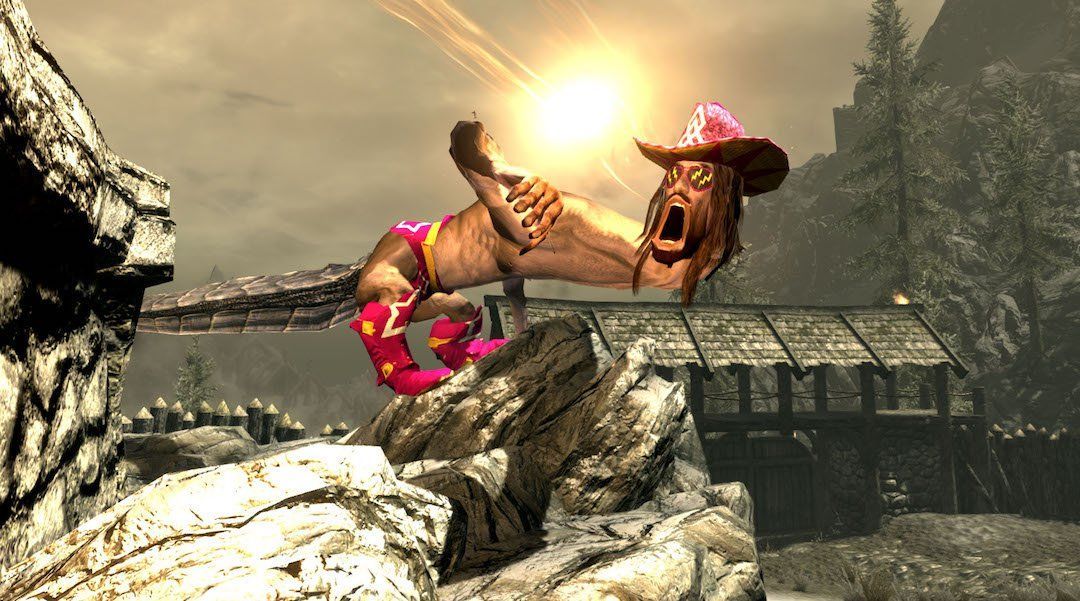 Macho Man Randy Savage dragon mod creator Fancy Pants confirms his creation will be making its way to Skyrim Remaster on Xbox One but not PlayStation 4.

In the years since the release of The Elder Scrolls 5: Skyrim there have been hundreds of mods available for the game. Some improve the visuals, some improve the UI, and some add a little unexpected “flavor” to the experience. One of those Skyrim mods that took the community by storm but didn’t really add anything was the Macho Man Randy Savage Dragon mod.

For those who might not be familiar, the Macho Man dragon mod reskinned all of the dragons in Skyrim and gave them new audio cues. Instead of vicious lizard-like beasts, the dragons now had the face of Randy Savage. And instead of terrifying roars, they would let out “Oh Yeah!”

It was a completely pointless mod but one that every Skyrim PC player had to try out, and soon console players can enjoy the absurdity; that is, if they are playing on Xbox One. As most know, this week saw the release of The Elder Scrolls 5: Skyrim Special Edition, a revamped version of Bethesda’s hugely popular game that featured a new graphical sheen and support for mods. And as expected the Macho Man dragon mod has joined the list of upcoming, with the mod’s creator Fancy Pants saying Macho Man dragons are “definitely” coming to Xbox.

As far as PlayStation is concerned, it appears Fancy Pants is not a fan of Sony’s support for Bethesda games in the past and is taking a stand with his mod. It’s true that PlayStation platforms have been historically problematic when it comes to Bethesda releases, and the Skyrim Remaster is no different either. Mods are a major selling point for the game on console and yet the PS4 only offers 1GB of file space, whereas Xbox offers 5GB. Xbox also offered support for Fallout 4 mods on the One console – a first for the current generation.

“I have no plans to make any [mods for PS4]. None of the modders I know are planning on making anything, either. I think a lot of players are going to be very disappointed.”

Needless to say, when modders look at Skyrim mod ports, they favor Microsoft’s approach over Sony’s. That’s why there are already over 65 mods available for Skyrim Remaster on Xbox One, and only about 10 on PS4.

It’s a shame that the players have to suffer because of the decisions of a console manufacturer, but that’s the nature of gaming today. Modders clearly love freedom and if anyone stands in the way of that, they are less likely to deliver products for that platform. Even if those products include a giant Macho Man Randy Savage dragon.

The Elder Scrolls 5: Skyrim Remaster is out now for PC, PS4, and Xbox One.