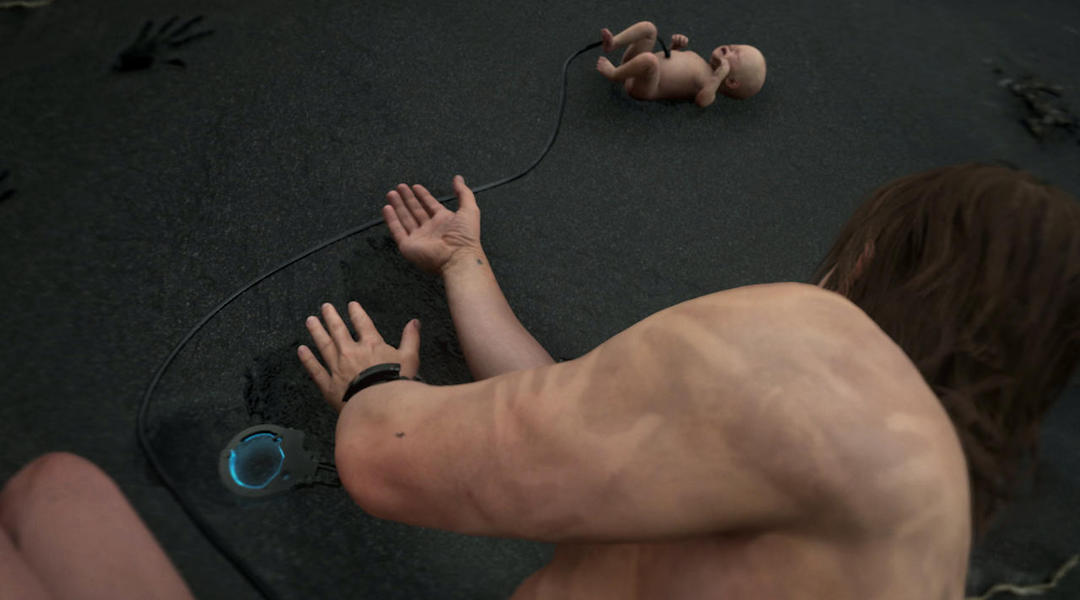 After Hideo Kojima took the stage at The Game Awards to accept his Industry Icon award and reveal a new trailer for Death Stranding, the Internet quickly went to work on dissecting the new footage for hidden clues and messages. Reddit user constablegrimes was among those trying to decipher the confusing new Death Stranding trailer, and he discovered that when one plays both of the trailers released for the game side by side, something very interesting happens.

With both the E3 2016 and Game Awards trailers playing simultaneously, viewers will notice that when the infant disappears from the arms of Norman Reedus’ character in the E3 trailer, it then appears in the machine held by Guillermo del Toro in the Game Awards trailer at the same time. While some may write this off as a coincidence, knowing Hideo Kojima and the symbolism he likes to stuff his games with, it’s likely intentional. But what does it mean?

One theory that seems to be prevalent is the idea that Death Stranding deals with multiple realities. According to this theory, the machine Guillermo del Toro has allows him to pull the infant away from the reality Norman Reedus is trapped in. The purpose of the infant is unknown, but del Toro retrieves it after spotting a number of heavily armed soldiers, so perhaps infants are used by the characters in Death Stranding for power.

After watching both the trailers, it seems like Guillermo del Toro is unable to recover the infant until he touches the black water; perhaps the water is necessary to transfer beings or objects from one world to the next. Of course, that is just speculation at this time, but until Hideo Kojima is willing to offer more concrete details, speculating is the only thing fans can do.

Luckily, more information on Death Stranding is expected to come as soon as today. The game is scheduled to have its own PlayStation Experience panel, where Hideo Kojima will be joined by the likes of Geoff Keighley, and presumably some stars of the game, like Norman Reedus, Guillermo del Toro, and Mads Mikkelsen. It’s possible that more footage of the game will be shown during the keynote presentation as well, though it’s more likely that the Game Awards trailer will be shown again instead.

With Death Stranding still early in development, the general lack of information isn’t surprising, but hopefully solid information on the story is revealed soon. In the meantime, expect fans to continue to dissect any new footage of the game in search of more clues and secrets.

Death Stranding is in development for PS4.