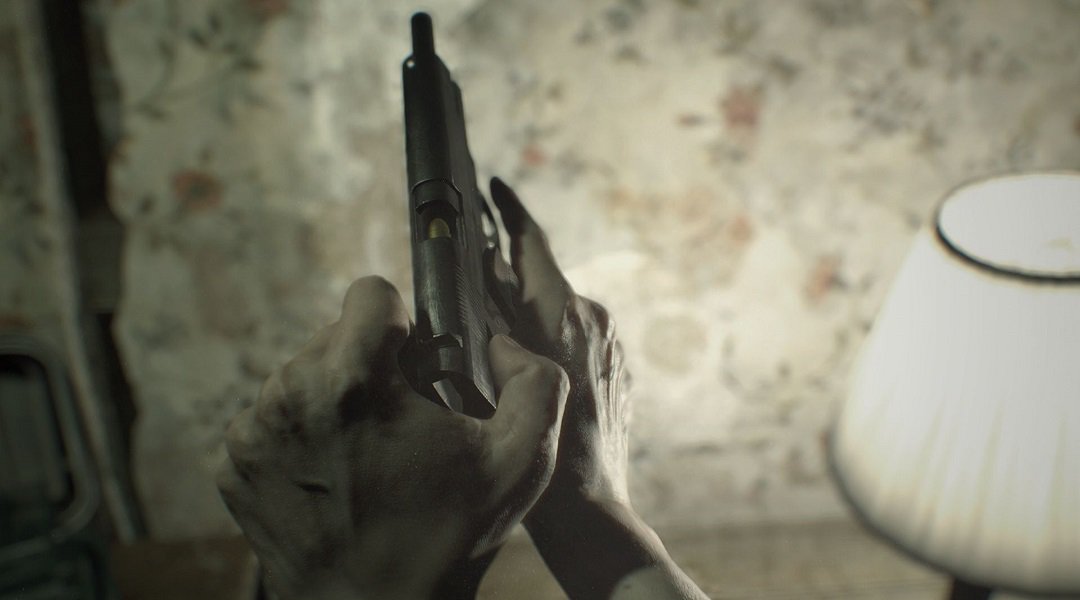 Resident Evil 7 Demo Guide: Where to Find the Handgun

The Midnight Version update for the Resident Evil 7 Beginning Hour demo finally lets players find a handgun. Here’s where to find the handgun and some of its ammo.

The original version of the Beginning Hour demo for Resident Evil VII didn’t give players the chance to try out the game’s combat. In fact, the only weapon players could obtain was an axe that could be used to smash boxes and mannequins, but nothing else. The second update added handgun ammo, but no handgun to use them, let alone any enemies to shoot. With the third and final demo update for Resident Evil VII, Capcom has finally made it possible to find a handgun, giving gamers a taste of the game’s gun combat.

Obtaining the handgun in the Midnight Version update for the Resident Evil VII demo is not exactly a walk in the park, especially for those new to the demo. The first step is to pull the fireplace handle in the starting room, going through the secret panel that opens near the bookshelf, and then grabbing the fuse off the crate in the crawlspace. Add the fuse to the fusebox near the piano in the starting room, and then go upstairs.

Push the button here to bring down the attic stairs. In the attic, grab the basement key off the desk near the bed, and then go back downstairs. At the end of the first hallway is a strange, moldy door that has been part of the Beginning Hour demo since the Twilight Version update. It’s now unlocked, though, so go through to find a brand new area.

This new area is a long hallway. The first door on the right is a bathroom, and at the end of the hallway is a gated door that serves as an alternate way into the basement. The bathroom is interesting, with handgun ammo on a tray, a blood-filled bathtub with a bicycle in it, and a toilet bowl that’s also full of blood. Examining the toilet bowl will reveal that there’s no water in the tank to flush away the blood, so that will need to be rectified before players can get the handgun.

To drain the toilet bowl, players need to find the valve. Go to the gated door at the end of the hall and use the basement key to get to the basement. The valve is sitting in plain sight on a gurney here, so grab it. As soon as this happens, one of the “molded” monsters will appear. It takes about four to five hits from this creature for players to die, so it poses a significant threat, especially in such a cramped environment with little room for maneuverability.

Try to exit the room through the door, and Jack Baker will block it. Now the trick is to kick one of the body bags hanging from the ceiling into the monster so that it falls down, which should give players enough time to kick the door in. Run back upstairs and return to the bathroom, using the valve on the pipe to drain the toilet bowl. With the toilet bowl drained, players can collect the handgun and prepare to use it against the monster.

Ammo for the handgun is scattered throughout the Baker family plantation. Some can be found underneath the bed in the attic and in boxes that can be smashed with the axe, so keep an eye out. The only real use for the handgun is fighting the monster in the basement, which makes good target practice for those hoping to test out Resident Evil VII‘s gun combat before launch.

Resident Evil VII will be available on January 24th, 2017 for PC, PS4, PlayStation VR, and Xbox One.