Even though rumors indicate that there will be no new main series Assassin’s Creed in 2016, Ubisoft is not one to let its flagship franchise rest. Not even two months into 2016, and Assassin’s Creed Chronicles: Russia is the second spin-off game in the series we’ve seen released so far.

Players complete these tasks in post-Revolution Russia (circa 1918) by controlling two different protagonists. One is assassin Nikolai Orelov, who has one last mission to complete until he and his family will be allowed to leave the Order of Assassins to start new lives. And the other is Anastasia Nikolaevna, known for being the Grand Duchess of Russia during the October Revolution, and made even more famous by rumors surrounding the possibility that she survived her family’s brutal massacre. 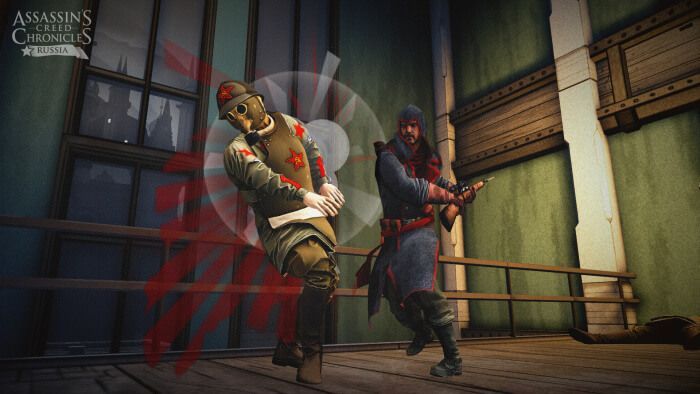 It’s widely accepted by historians that Anastasia did in fact die at the same time as her family, but the Assassin’s Creed franchise hasn’t worried itself too much with historical details in the past, and there’s no need to start now. Anastasia is by far the most interesting character, and with a couple of brief exceptions, is really the only significant real-world historical figure in the game, so we can forgive the historical liberties taken.

Anastasia and Orelov have the same basic skills, though Anastasia has the added benefit of being able to use special Helix abilities. Those that played the previous games in the Chronicles off-shoot series should be familiar with these powers, which allow Anastasia to do things like dash from cover to cover without having to worry about being seen by the enemy.

Orelov, while lacking special Helix powers, has more gadgets that he can use to get through enemies. These include smoke bombs, a grappling hook, and a sniper rifle. The sniper rifle is Orelov’s signature weapon, and is most useful for killing enemies from afar to avoid the clumsy melee combat, which, as our Assassin’s Creed Chronicles: China review will attest, has been a problem in this spin-off series since the beginning.

Continued disappointment with the melee combat aside, Orelov’s sniper rifle lends itself to some of the most interesting bits of the game. At various points, the perspective shifts to a first-person view, with players aiming down the sights of Orelov’s sniper rifle to pick off distant enemies. While these little sections of gameplay are not very challenging, they serve their purpose as a nice counterpoint to the side-scrolling action.

Even though the game works to break up the monotony, it’s hard to overlook the one-note stealth sections. Assassin’s Creed Chronicles: Russia works best when it lets players use the characters’ abilities to get through areas themselves, but there are too many sections that are favor trial-and error. There’s no sense of creativity and no room for experimentation.

The game also stumbles when it comes to the timed platforming challenges, which demand an absurd amount of precision and perfection from players. Again, there’s no sense of player control at play in these sections – simply rote repetition. In fact, a few of the later challenges might be so frustrating that players will simply put the game down and never pick it back up.

The game does feature a New Game Plus mode and a second version of New Game Plus with greatly increased difficulty, but it’s hard to imagine anyone wanting to go through the frustrating later levels again. Besides achievements and trophies, the only reason to bother with New Game Plus is to fully upgrade Anastasia and Orelov, which is not a very fulfilling venture.

Assassin’s Creed Chronicles: Russia is available now for PC, PlayStation 4, PlayStation Vita, and Xbox One. Game Rant was provided an Xbox One code for this review.