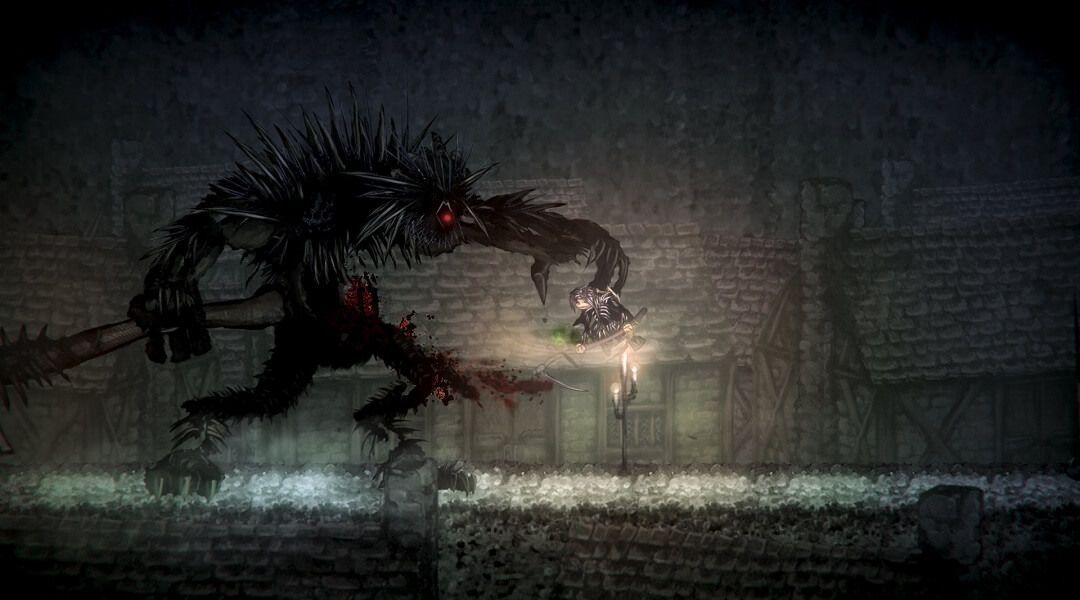 Ska Studios’ Salt and Sanctuary is obvious about trying to emulate Dark Souls, but offers enough deep gameplay and beautiful aesthetic to stand tall on its own.

It’s no secret that the release of Dark Souls revolutionized modern gaming in a way few could have foreseen. Prior to From Software’s surprise hit, successful video games had been largely trending in the direction of exchanging difficult gameplay for innovation and narrative. After Dark Souls, however, there has been a resurgence in both intensely difficult and borderline masochistic gaming experiences – as well as smashed controllers and keyboards – and the two trends are not coincidental. Ska Studios’ Salt and Sanctuary is the latest game to attempt a foray into the genre of brooding, unforgiving action RPGs, and it has a lot to live up to given the recent success of Bloodborne and the upcoming release of Dark Souls 3.

For the most part, Salt and Sanctuary is a refreshing look at a genre that is quickly becoming filled with a number of indistinguishable and uninspired clones. Let’s get this out of the way right now – Salt and Sanctuary is unabashedly inspired by the Dark Souls series, and Ska Studios is unapologetic in milking that franchise for some of its finer qualities. Everything from the visuals to the gameplay is at least a little bit Dark Souls (or sometimes a tad Bloodborne instead), and at times it feels the game is toeing the line between loving homage and copy cat very dangerously.

That being said, there is one element of the Dark Souls series that fans will have hoped Salt and Sacntuary managed to emulate or improve upon – combat. Like it or not, this style of action RPG lives and dies by the skill it takes to its swords, and Salt and Sanctuary is no different. Luckily for gamers looking to spend countless hours on boss fights in order to find the perfect strategy, Salt and Sanctuary is just as difficult and maddening as the genre’s best.

While the game’s combat may look simple at a glance, largely due to Salt and Sanctuary‘s two-dimensional trappings, the combat is nuanced and skill-testing in execution. Once players wash up on the shore of Salt and Sanctuary‘s strange, purgatorial island, they are left with a few tips on how to block and dodge during combat. After that, though, gamers are thrust into the meat of the gameplay with very little hand-holding, and it’s up to each would-be hero to discover the combat timing and skills required to survive the mysterious isle.

Of course, skills in Salt and Sanctuary matter more than just those that apply to mashing buttons desperately after a giant ogre has flung your avatar halfway across the screen. Ska Studios’ effort includes an incredibly detailed skill system that helps gamers customize their hero beyond the starting eight classes, enabling maximum nitpicking between defensive or berserker styles. Ultimately, however, the game is built upon a system that rewards meticulous study and mechanical execution much more than optimal class builds. The skill system felt largely like a nice addition that makes the game a little more manageable, but not something that was necessary to spend too much time analyzing, and that’s a welcome change to the usual RPG approach of thinly-veiled Excel spreadsheets that are crucial in developing playable characters.

Salt and Sanctuary‘s combat also helps develop player characters through an experience system based around salt. The various monsters and undead lords that populate the island are the souls of drowned sailors, so instead of something like an orb of glowing light representing experience, gamers instead get bits of salt. Salt can then be offered to various deities at the shrines that act as pseudo camps and save points to level a gamer’s hero. If it sounds simple, that’s because it is, but death will result in players losing all of their accumulated salt and having to earn it back from a salt-covered monster that spawns where they last died. This is not a game for the faint of heart.

While most of Salt and Sanctuary‘s risk-and-reward set-up enriches the playing experience, the lack of navigation and quest direction is not one of them. It’s easy to underestimate how incredibly well the Dark Souls series and Bloodborne layout their respective worlds, because although they also rarely offer the player any sort of hints or help, playing the game inevitably leads to discovering the way to continue progressing. This is not so in Salt and Sanctuary, which features a very confusing progression layout that will have players stumbling into enemies that are well-above their level early on. It’s a bit of unnecessary frustration in a game that already creates a healthy amount of it.

It’s possible the overly-complicated layout is a product of Salt and Sanctuary‘s 2D aesthetics, and if that is the case, Ska Studios made the right choice in keeping its visuals the way they are. Salt and Sanctuary offers a gothic, moody nightmare that is as beautiful as it is dark, made all the more impressive by the fact the game is very clearly meant to look a little retro as well. It’s what the ill-fated Slashy Souls should have looked like, and it’s a lesson in how to achieve an eerie and tense atmosphere without needing million dollar graphics engines.

That sense of unease pervades the game’s minimalist story as well, which functions flawlessly in making the narrative seem just important enough without bogging Salt and Sanctuary down with unnecessary philosophical discussions or overly complex plot twists – the kind of execution that should make RPG fans wonder what happened with Black Desert Online. All of this is helped by the fact that Salt and Sanctuary‘s soundtrack is one of the best on offer in early 2016, and should gamers need a playlist for a creepy medieval Viking party they happen to be throwing, there is no better choice than Ska Studios’ mix of unsettling church organs and electric guitar.

Overall, despite some minor flaws in the game’s layout and presentation, Salt and Sanctuary is one of the early contenders for indie game of the year in a field that already has some stiff competition in titles like Firewatch. Ska Studios’ loving send-up of From Software is the finest 2D action RPG that’s been released in some time, and is a must play for gamers who enjoy the kind of sadistic gameplay found within Dark Souls and Bloodborne.

Salt and Sanctuary is available now on PS4, PC, and PS Vita. Game Rant was provided a PS4 code for this review.